At WWDC20, Apple announced iOS 14, the next major release of one of the most popular mobile OSes. Among the new features, they finally added the ability to put widgets on the home screen:

In this article, we will port the beautiful weather widget of iOS 14 to the web, implementing it as an universal Web Component.

You can find the source code for this project at this GitHub repository. A live demo is also available here!

Web Components is a name that refers to a stack of different technologies that enable us to create reusable custom HTML elements:

In particular, a Web Component is made up of 3 things:

For a deep dive into each of these terms, you can refer to the exhaustive MDN resources. The interesting thing to note is that they are supported by all major web browsers:

There are a bunch of tools for building Web Components without having to manually define a custom element, creating a shadow DOM root, attacching it to a DOM node and taking care of the interactions with other elements. Among others, we will here use Stencil.

Stencil is a toolchain for building highly optimized and 100% standards based Web Components that run in every browser: 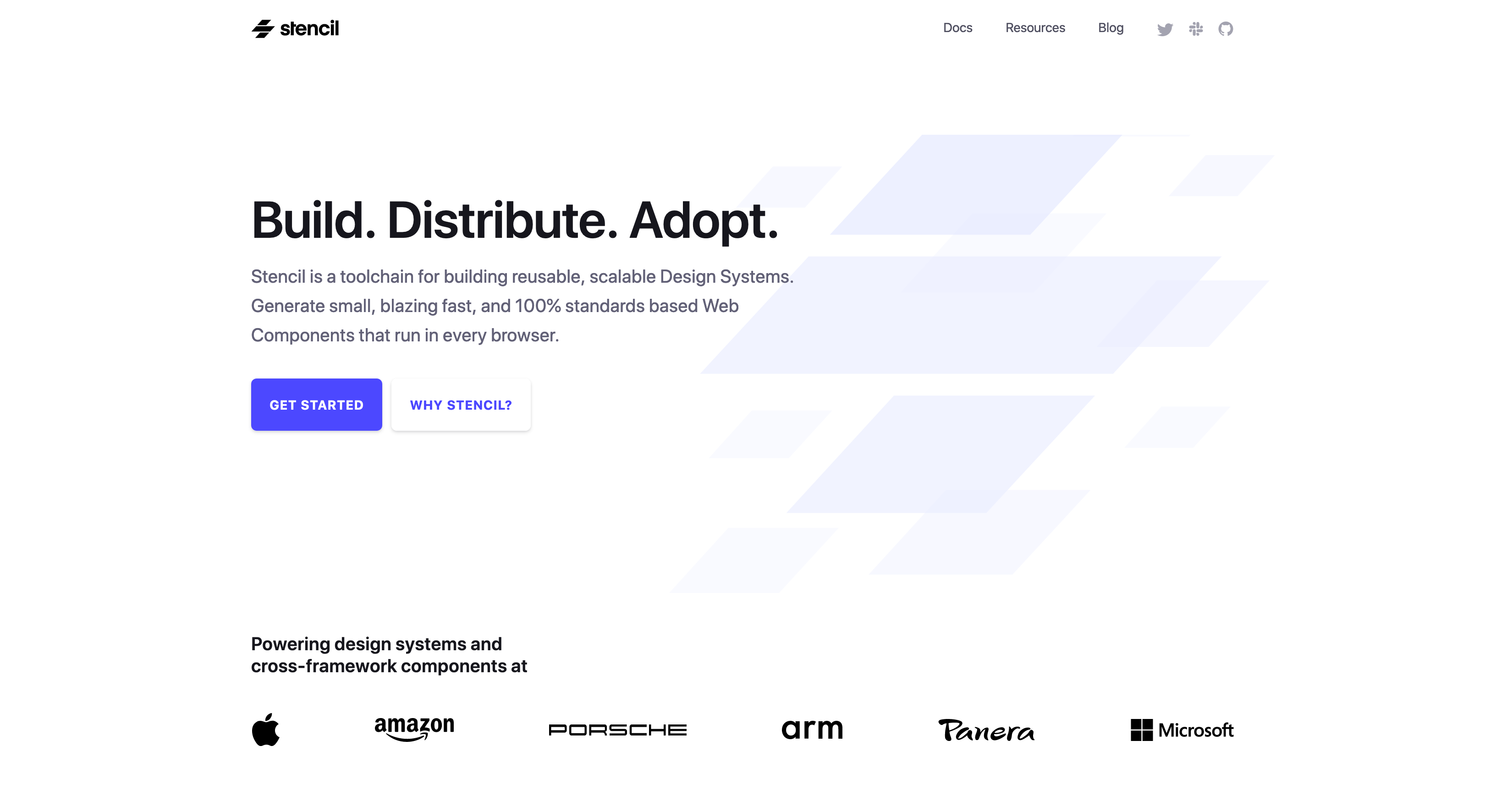 It is developed and maintained by the Ionic Framework team and combines the best concepts of the most popular frameworks into a simple build-time tool, such as:

To start a new Stencil project, type the following command into a terminal (make sure to have a recent LTS version of NodeJS and npm v6 or higher):

Stencil can be used to create standalone components, or entire apps. After running init you will be provided with a prompt so that you can choose the type of project to start. In our case, let's choose component:

Next, we need to provide a name for the project, for example "ios-14-weather-widget". After that, a folder containing our project is created: 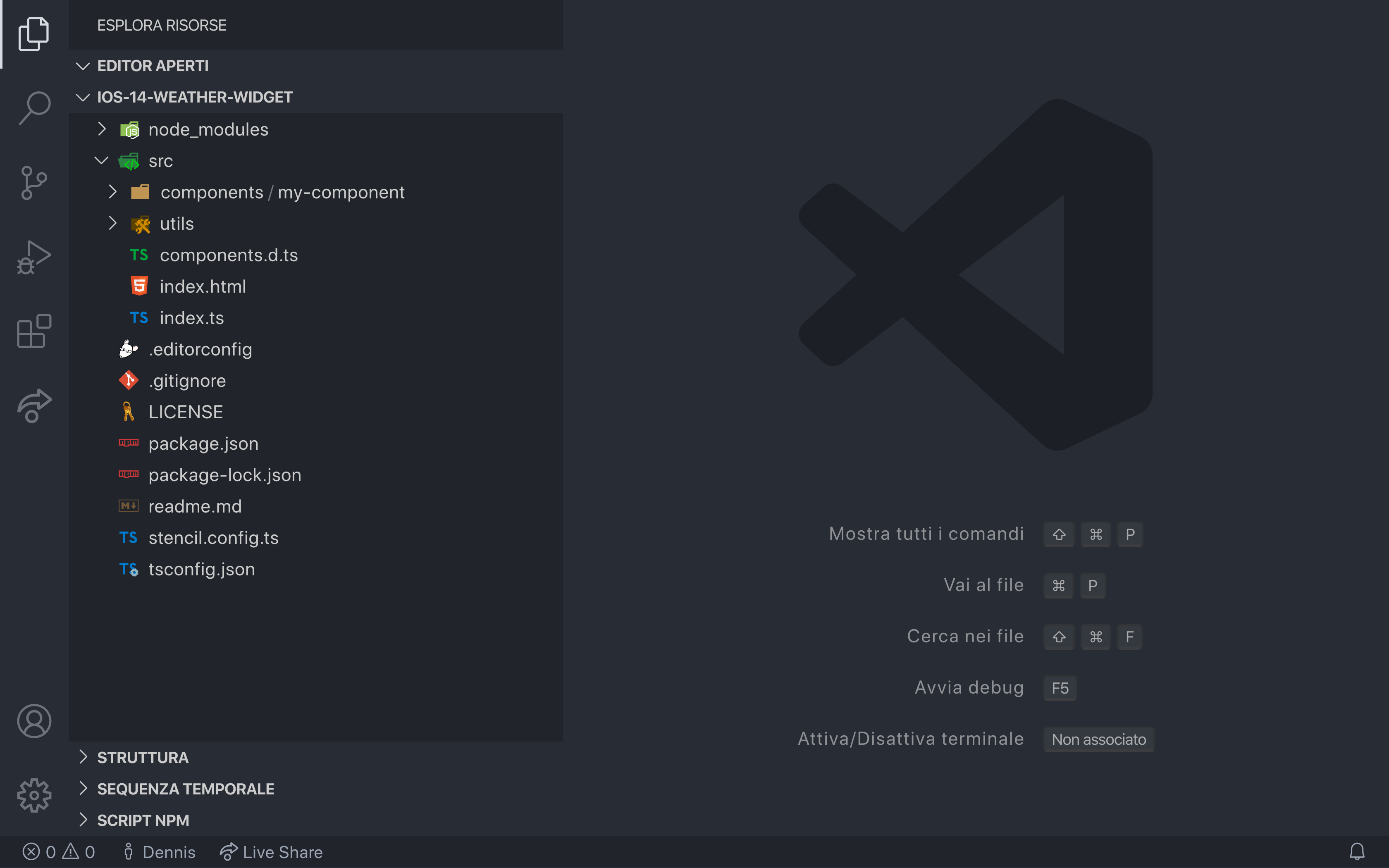 Our project contains a bunch of files and folders, including a configuration file for TypeScript (tsconfig.json) and one for the Stencil compiler (stencil.config.ts).

The src/ folder contains the source files for our project. The most important ones are:

Anatomy Of A Stencil Component 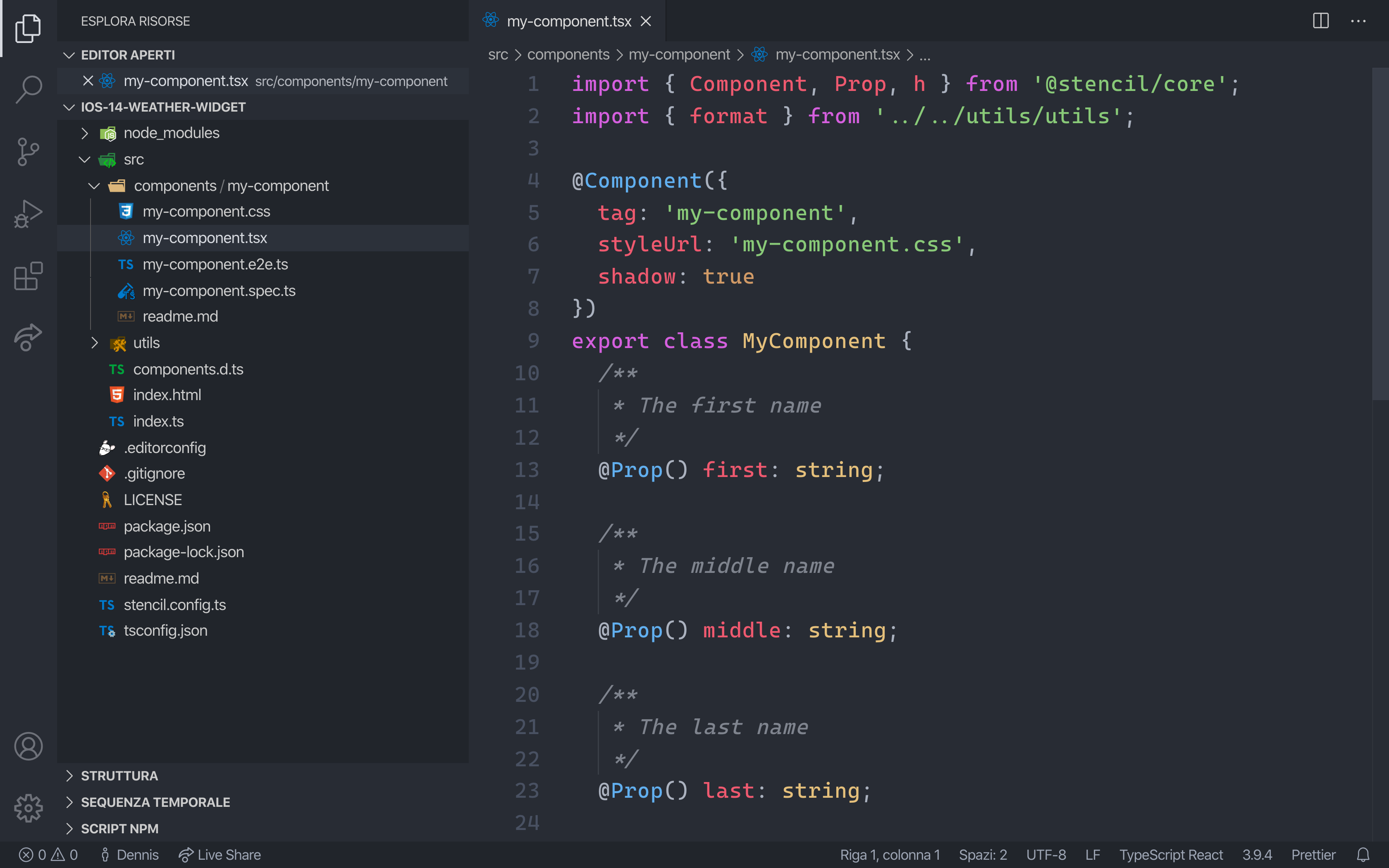 We can delete the exising src/components/my-component/ directory because we will generate one for our widget later.

We have two ways to create a new component: we can either manually create a folder under the src/components/ directory with a .tsx file inside it, or we can use the generate NPM script specified in package.json.

We choose the second way, since it is quicker and standard. So, for the weather widget component, type this on the terminal and hit Enter:

Next, the generator script asks us which additional files we want to generate alongside the .tsx one:

For the purpose of this article, we can choose only Stylesheet (.css), so the script generates a stylesheet file for our component. When we hit Enter, the final result is this:

For a detailed explanation of what is going on here, please refer to the excellent Stencil documentation – in particular, the Components section covers everything we need to know.

We want to reproduce the original iOS 14 weather widget:

To do so, our component needs to show the following information:

So, we add some attributes that the component will expose publicly – sort of props in the React world. Let's do it by importing the Prop decorator from @stencil/core and by adding some class members decorated with it:

Note that we have initialized the props with hardcoded values – it is fine for now. Next, let's edit the render() method in order to display the data:

This is a simple markup that implements the structure of the widget. We have also given classes to elements so we can easily style them using CSS. The curious thing to note here is that on line 9 we are using the <ion-icon> element: as you guessed, this is not a standard W3C HTML element; instead, it is a Web Component coming from the Ionicons icon library.

Before we can have a preview of what we did, let's edit the src/index.html to include what we need:

We can now have a preview of what we did! Type npm start in a terminal and hit Enter, then a browser window will automatically appear showing the index.html:

Ok, this definetely does not look like the original iOS weather widget yet, but look at the page inspector inside the Developer Tools: the DOM does contain a <weather-widget> element that the browser is actually understanding and rendering! 🤩

Pro Tip: From the page inspector panel, try to add a location attribute to the <weather-widget> element with a value of your choice, then see how the text "Milan" is replaced by what you specified!

Now that we wrote down the structure of our component, let's style it trying to get as close as we can to the iOS original widget.

The :host pseudo-class selects the DOM node to which the shadow DOM of our custom Web Component is attached. We are simply saying that it is a flex container of size 256x256 pixels, whose children flows in column and have space between them.

All the rules listed here have been inferred from the original Apple weather widget.

Once we save the file, the dev server automatically reloads the page, and this is the result: 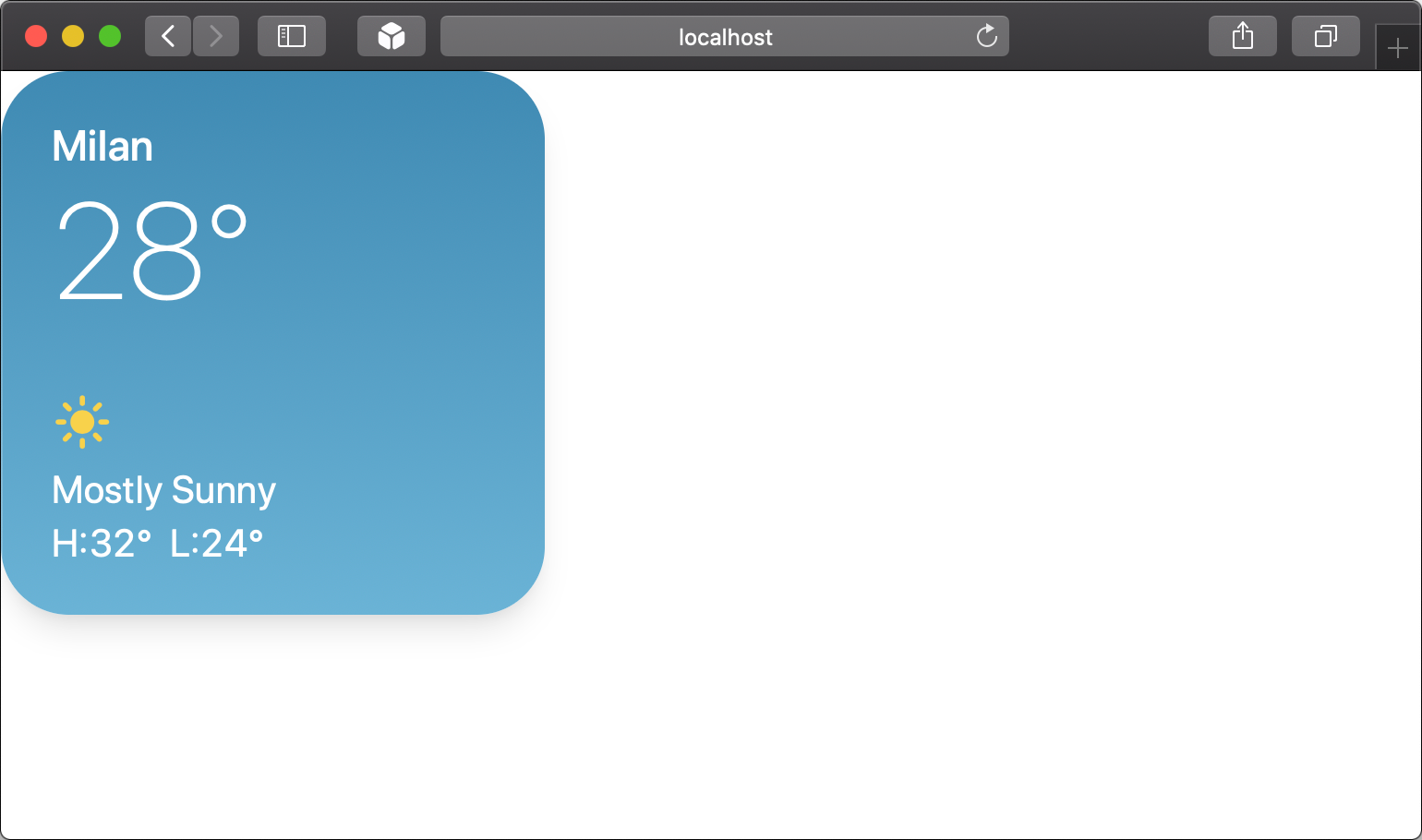 Wow, it looks pretty close to the original one!

For the sake of completeness, let's add a background image to the page and center the widget.

To do so, we need to add a global style in the container page, so let's create a src/global/ folder inside which we create a style.css file and an assets/ folder.

Then, open the src/global/style.css file and paste the following:

Then, copy the background image to the src/global/assets/background.jpg file – I chose one of the original iOS 14 wallpapers.

Now that we did this, we need to tell the Stencil compiler to take those 2 files into account. To do so, open the stencil.config.ts and add the highlighted lines:

Line 5 tells the compiler where our global stylesheet file is located, while lines 17-22 are needed in order to copy the background image to the final bundle.

The last thing to do is to update the src/index.html in order to add the compiled global stylesheet using the <link> tag inside the <head> element:

Finally, stop the running dev server and start it again, so the new configuration file is reloaded, and...

Whoa, it looks so beautiful 😍

What we built in this article is just a simple Web Component that receives some attributes and renders them.

In a future post, we will see how to read the real user location and how to automatically fetch the weather data.

You Will Stop Using LocalStorage